I’ve lived with cat companions for the last twenty years. One of our current furry friends is Pablo. He’s special to us as he’s the first cat my wife and I adopted together. When we saw him at the shelter we knew he was the one for us.1 It turns out we also rescued him from a certain fate as we were informed after we adopted him that he was scheduled to be put down the next day. He had simply been in the shelter too long. 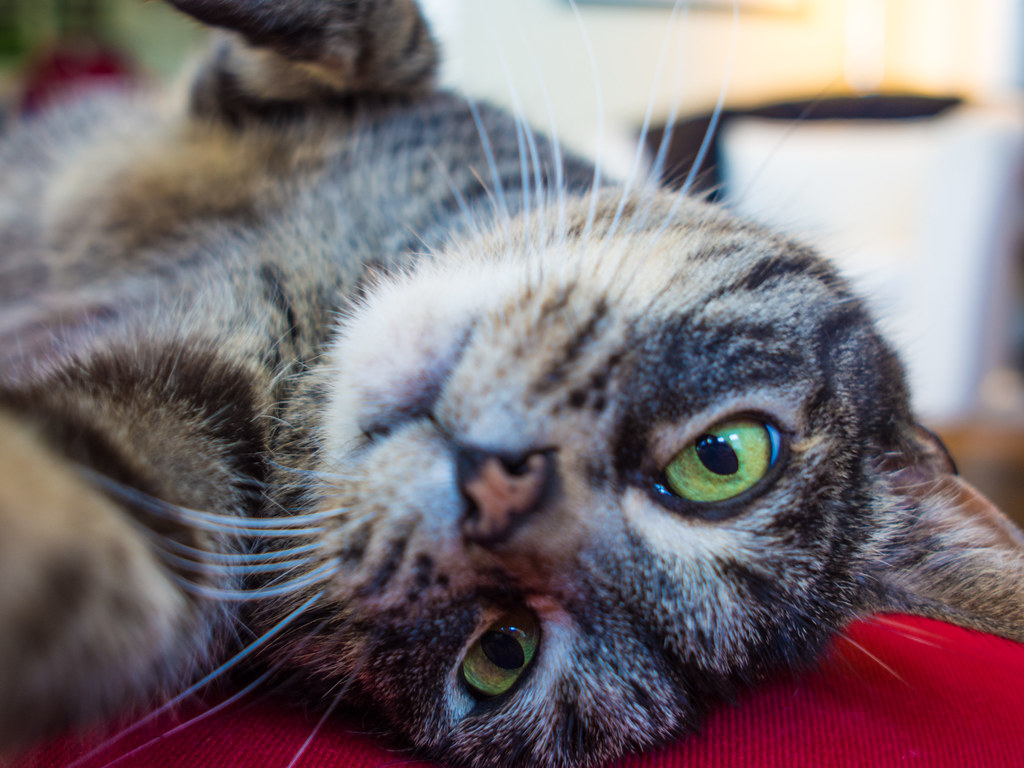 The shelter staff told us that he had lived with a cat horder and she voluntarily surrendered him because he had lost almost all of his fur. It turns out Pablo is highly allergic to flea bites and it caused his fur to fall out. A bath and some flea control medication were all he needed to get back on track.

As a result of Pablo’s allergy we decided to keep him as an indoor only cat. We really don’t know what his life was like before us but now he was our responsibility so we’re taking care of him. He’s always loved sitting by windows and been curious about the outside. He will quickly come to open doors and start to poke his head outside. That is, of course, where his adventure begins.

We have a corner market next to our house in Oakland. It’s very convenient to have since we can just pop next door for milk or whatever we need. Part of that is you’re just popping out for a moment and someone else is still in the house. Occasionally one may not close the door all the way. This is where curious cats slink over to take advantage of the open door opportunity.

On the night of October 9th Pablo got out.

Today is the 30th anniversary of the Macintosh computer’s release. Not Apple, but the Macintosh. Ponder that for a moment. Thirty years is a long time in the technology industry. Companies that were making personal computers thirty years ago are either long gone or have been absorbed into other companies. Dell came along a few months later and is still around, but like Apple of the past has been through the ringer.

My dad’s business had had computers for a long time. He had Tandy Model II and 16 computers running a version of UNIX and PCs running DOS and Windows. I had a TRS-80 that I learned to program on in BASIC. In elementary school we had Apple IIs and I loved those.

My first experience with a Mac was in high school around 1990. A friend had one and it was fantastic. When we both worked at Astroworld in the rides department during high school we got fed up with the time sheets provided. Over a week we used Quark XPress to create a new time sheet that was more flexible and easier to understand. We gave it to the supervisors of our department and they started using it right away. Without the WYSIWYG capabilities of the Mac it would have taken us a lot longer.

When I went to university in 1992 I took a Compaq 386 with me. I knew Windows and MS-DOS from working with my dad’s business. That computer lasted me through school, but at some point I started using the Mac SE and Classic models that were available in the College of Forestry. I worked in the GIS lab and used UNIX machines there, but for typing papers and creating charts and spreadsheets nothing beat the Macs. I always made sure I saved stuff so I could work on it on my PC, but there was just something about Macs.

When I took a surveying course the college had a site license for some surveying software that only ran on Mac OS. It was the best out there for what we did and I kept a copy to use later. Between the Junior and Senior years of school all forestry students went to a campus deep in East Texas and did a six week intensive field station course. We had another surveying class there and then used surveying in other courses through field station. Through the kindness of my then housemate Cameron I was able to borrow his Mac and take it with me to field station to run the surveying software. I also sweet-talked the forestry IT guy into letting me borrow a printer as long as I paid for the paper and toner.

With that Mac I was able to crank out not only every report with charts and graphs, but great maps too. I was one of the few people that brought a computer, and the only person to bring a printer, to field station so I ended up being pretty popular with people needing to type and print papers. The only other computers and printer were school provided in a shared area that was locked up at night.

After that college love affair I moved to New York and worked on UNIX and Linux machines for a long while. I dabbled personally with a DEC Alpha computer and some DIY PCs running Linux, but never quite brought myself to buy a Mac. After a while I was able to buy a used Blue & White G3. I started running Mac OS on it and dabbled with A/UX, but I really had it to try out Mac OS X.

Mac OS X changed everything for me. I ran that G3 for a while and then lots of OpenBSD machines (x86, sun, sparc64, alpha). I was able to get a PowerMac G5 through the Friends & Family purchase program offered to Pixar employees. Prior to that I had taken stabs at learning Objective C and Cocoa, but the lessons never stuck. This time I sat down and made myself learn and everything clicked. I also began to explore OS X as the workhorse that it is.

Now I’ve gone from the G5 to a white Macbook then to a Macbook Air and now to a Retina Macbook Pro. At one job we built out a full build farm with Mac mini and Pro models. Everything I ever want to do on a personal computer I can do on a Mac. Everything I used to do on high-end UNIX machines I can do on a Mac. I know they’re not for everyone, but I love the way that my novice relatives and I can both use Macs to get everything we need done.

Looking back it’s hard to imagine the Macintosh of today thirty years ago, but I’m glad it came out, because we’d all be poorer without it. What will another thirty years bring? I sure don’t know, but I’m excited to see it when it arrives.

Back in March I took a photo of a spectacularly foggy day in our neighborhood. 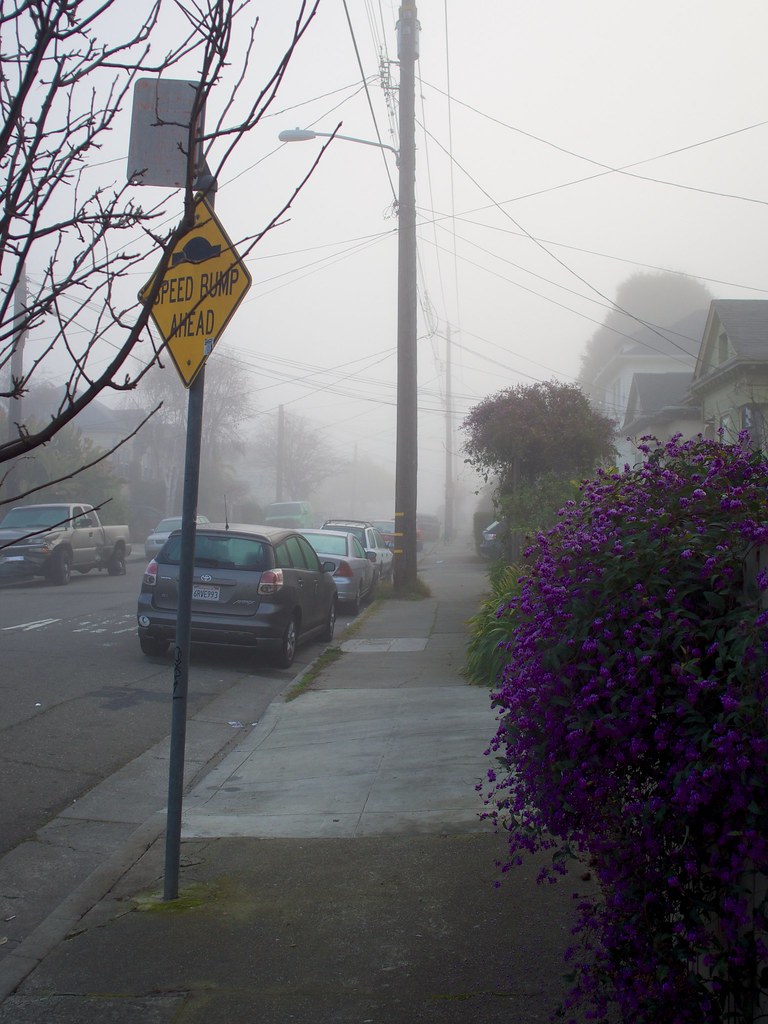 A while after Yahoo! released a new Weather app for iOS that takes contributions from Flickr users to provide imagery for the locales where weather data is being shown. I submitted my Foggy Oakland picture above and was accepted into their imagery pool.

Today it’s foggy enough in my zip code to use my picture! 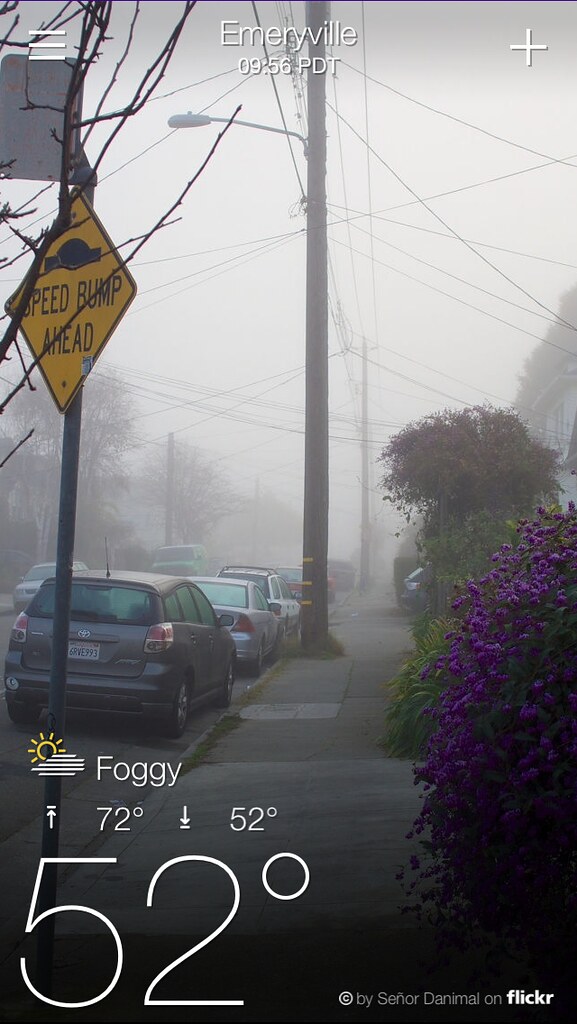 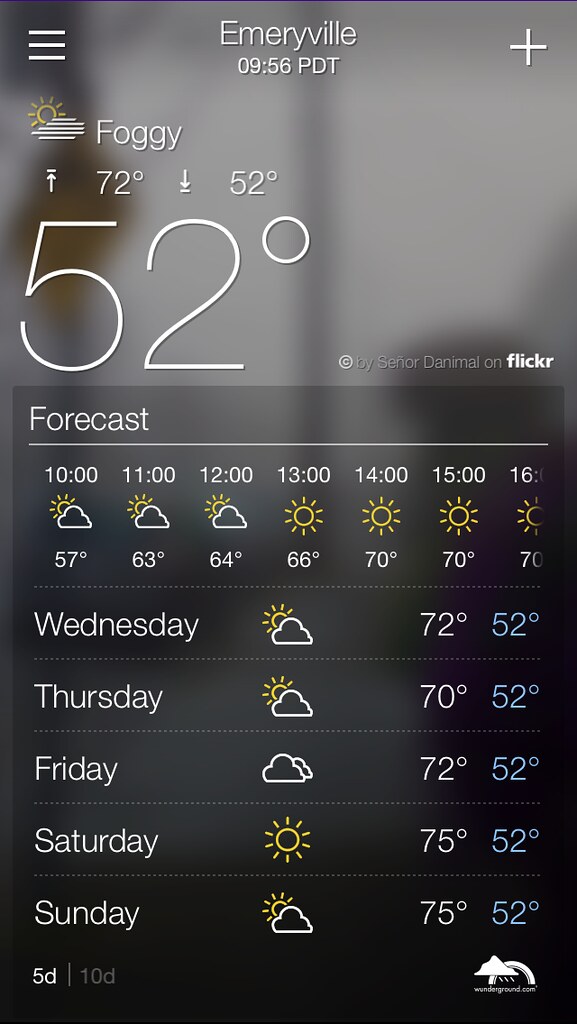 Today marks my tenth year of living in California1. It really is home for me. 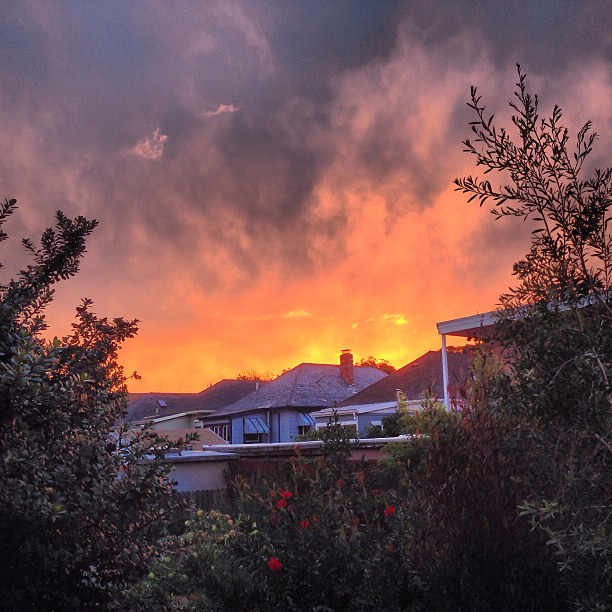 In those ten years I’ve:

For me California is now home. Oakland and the Bay Area just feel right. Sometimes if feels like far less than ten years and sometimes it feels like so much longer. I am very much looking forward to the next ten years and beyond.

This last Saturday Jo and I found ourselves in San Francisco at an early hour. We had some time to kill so we grabbed breakfast at Red’s Java House on the Embarcadero. 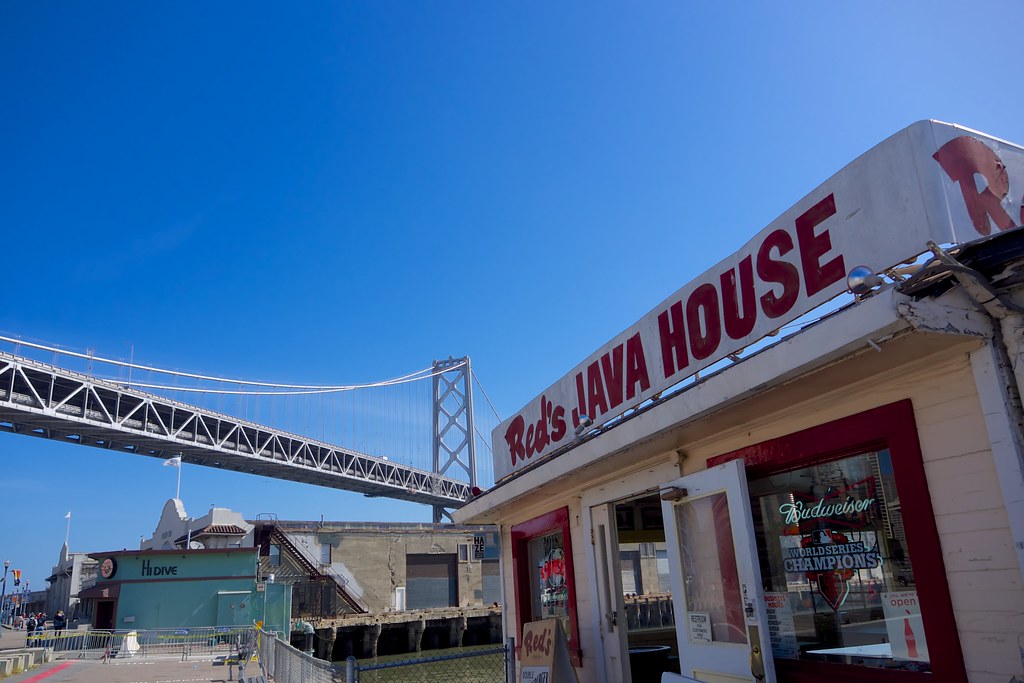 We had a glorious cheeseburger as part of our breakfast. 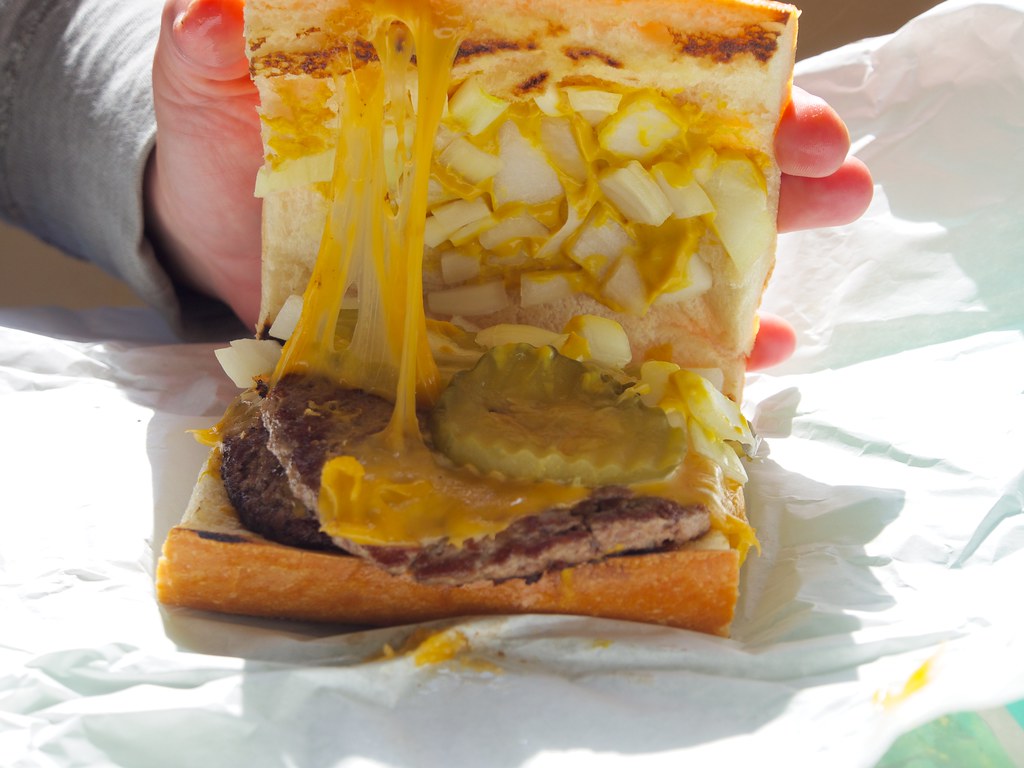 My lovely wife Jo has been busy planting in our backyard. There are a lot of blossoms, but two of the prettiest by far are our pok choy (Chinese cabbage) and sweet pea plants. 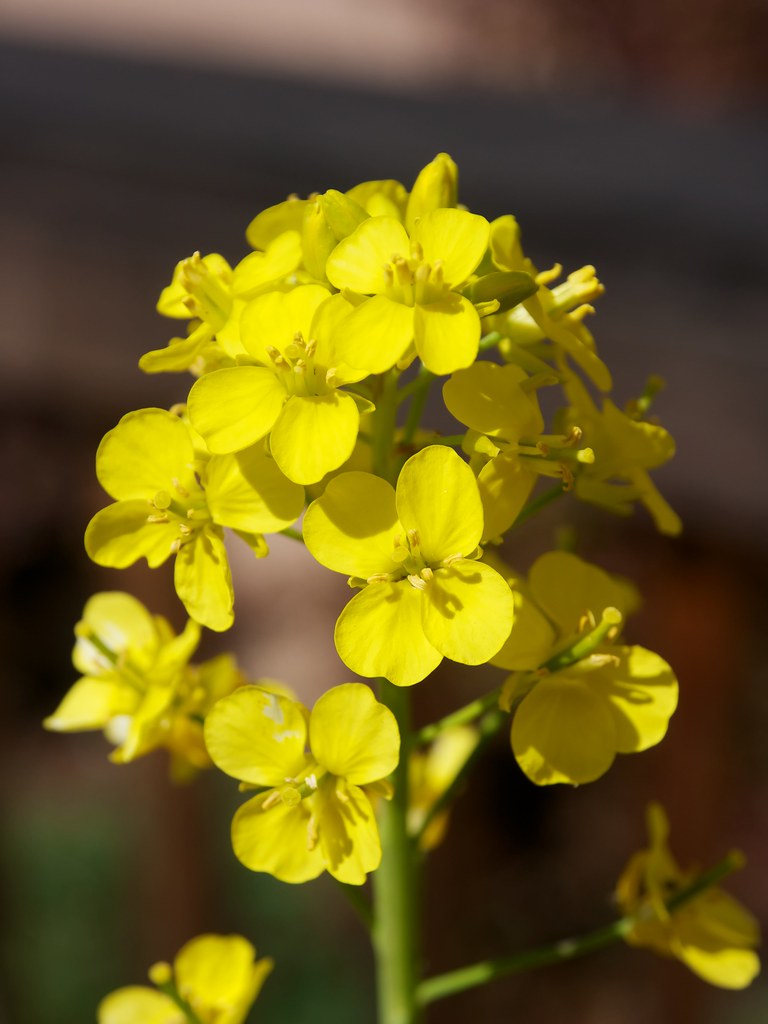 The sweet pea, which smells amazing but is not overpowering: 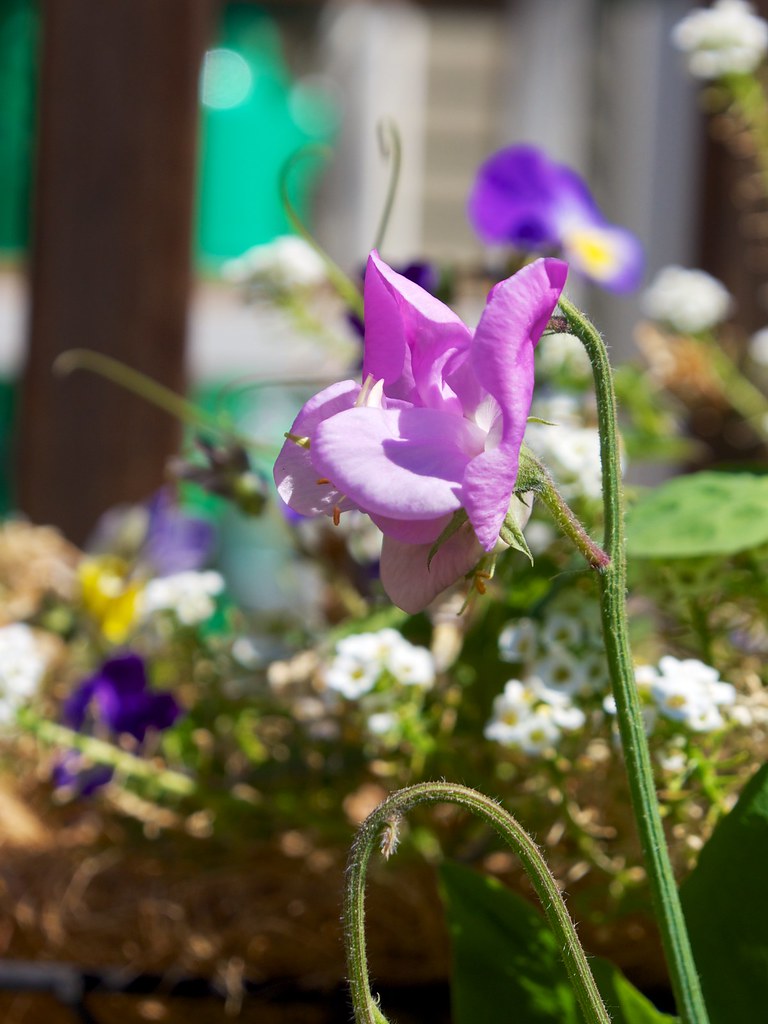 Interestingly, both of these were taken with the Olympus M.Zuiko 12-50mm f/3.5-6.3 lens. For a kit lens it is one damn capable and vastly underrated tool, especially considering it is weather sealed when used on the E-M5.

Last weekend I noticed two types of bees were all over a tree next to our house. 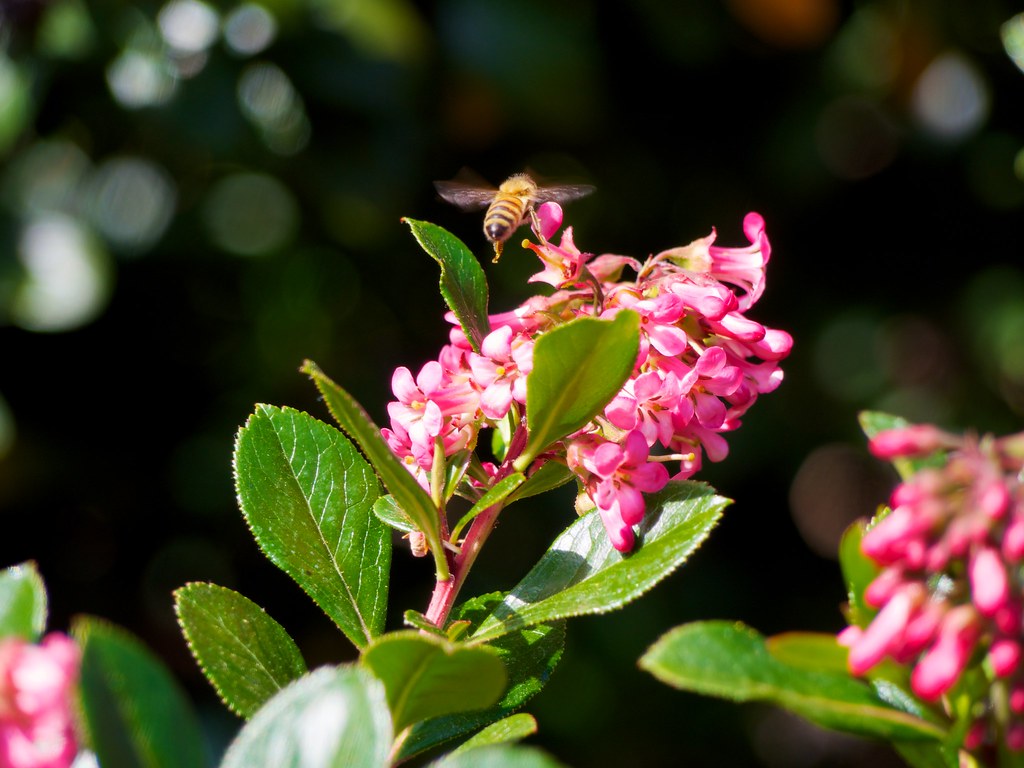 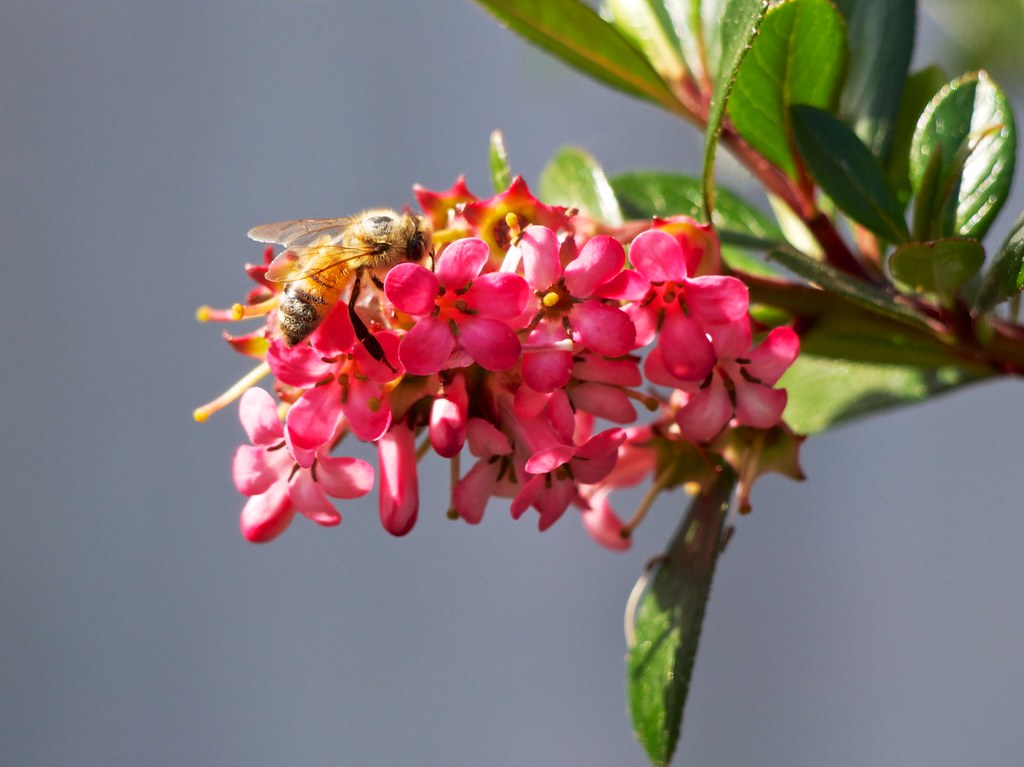 Only one kind of bee is pictured here, the other I poorly focused on. I need to practice more.

I recently picked up the Panasonic Lumix 12.5mm f/12 3D G Lens for a very great price from the Micro Four Thirds User Group. Being a slow lens (f12, eek!) it needs a lot of light to get a good capture. It is fortunate that I live in Oakland, California where we are provided many sunny days by nature. You’ll need red-cyan 3D glasses to see these images properly. Click through for the full size and full effect. 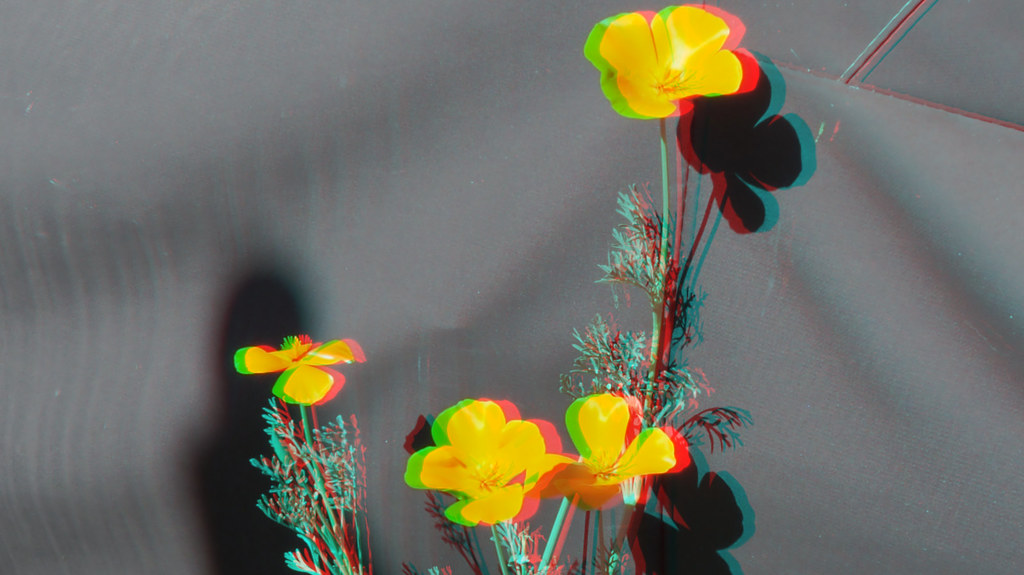 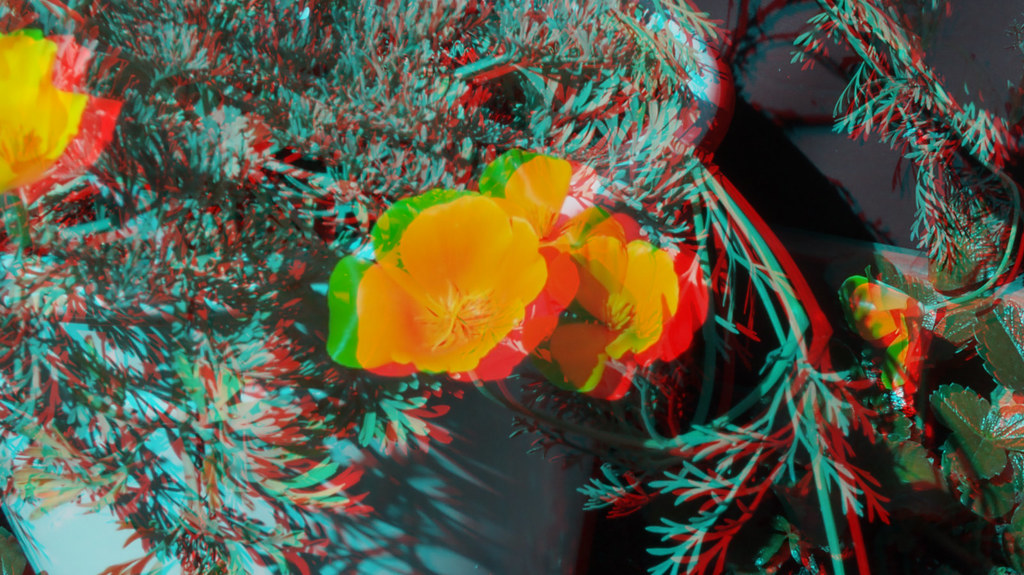 An avocado sapling grown from a pit (I particularly love the yard in the background on this one): 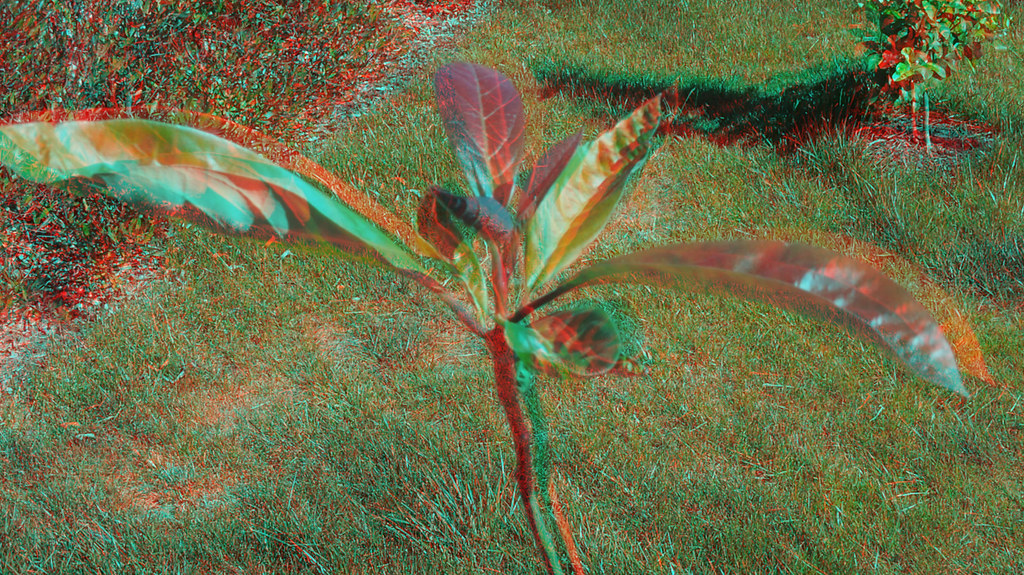 Listen closely folks and you can hear yours truly on Episode 33 of the Ruining It For Everyone podcast. I had a great time talking with Christopher and Maggie. If you dare listen you can hear me bloviate for two hours on subjects like working at visual effects studios, MTV’s Liquid Television (R.I.P.), photography, and much, much more.

Jo and I went to the Asian Art Museum today to see the Terracotta Warriors Exhibit. It was amazing to see the figures and other pieces from the period. The Asian Art Museum has a wonderful collection that we went through a lot of, but not all of it (we have to leave something for another time).

After that we went to the San Francisco City Hall and kissed under the small dome where we got married four years ago tomorrow. It was cute.

I took a bunch of pictures that you can see at my Asian Art Museum & Terracotta Warriors or SF City Hall Flickr sets. Below are a few of my favorites of the day. 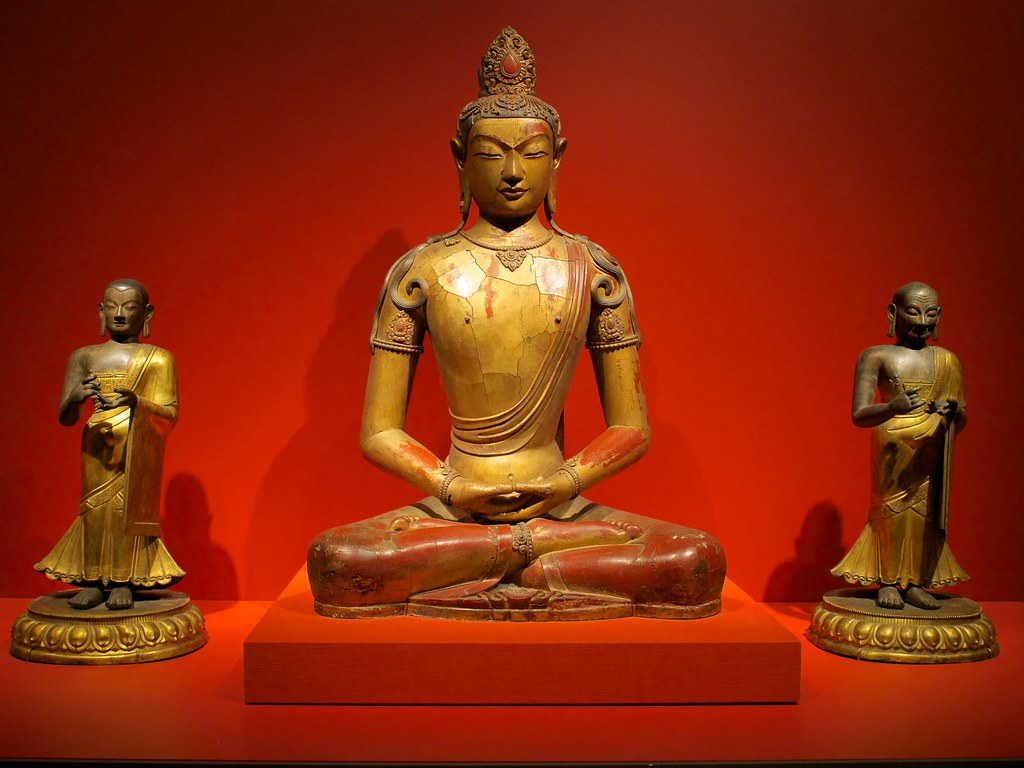 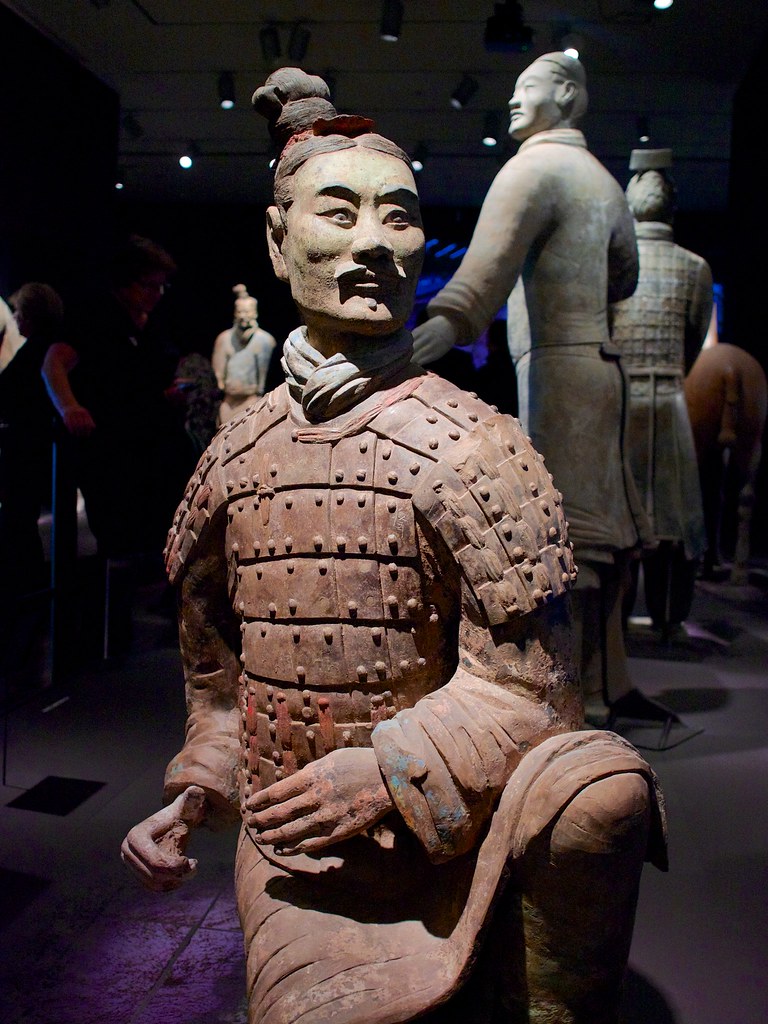 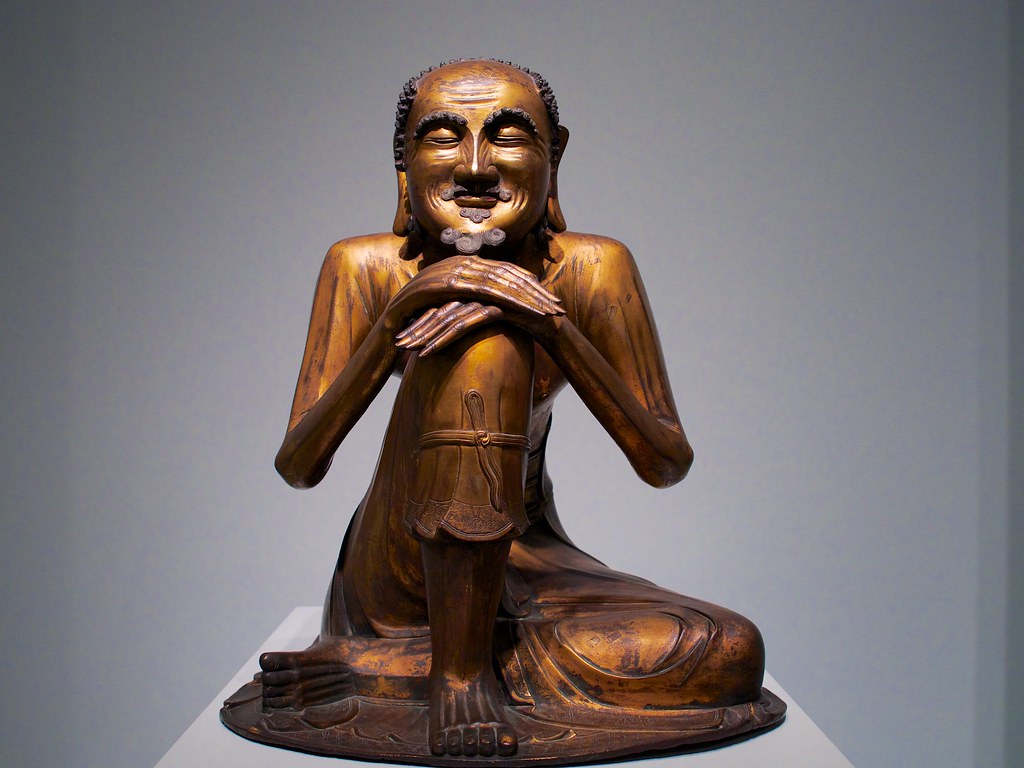 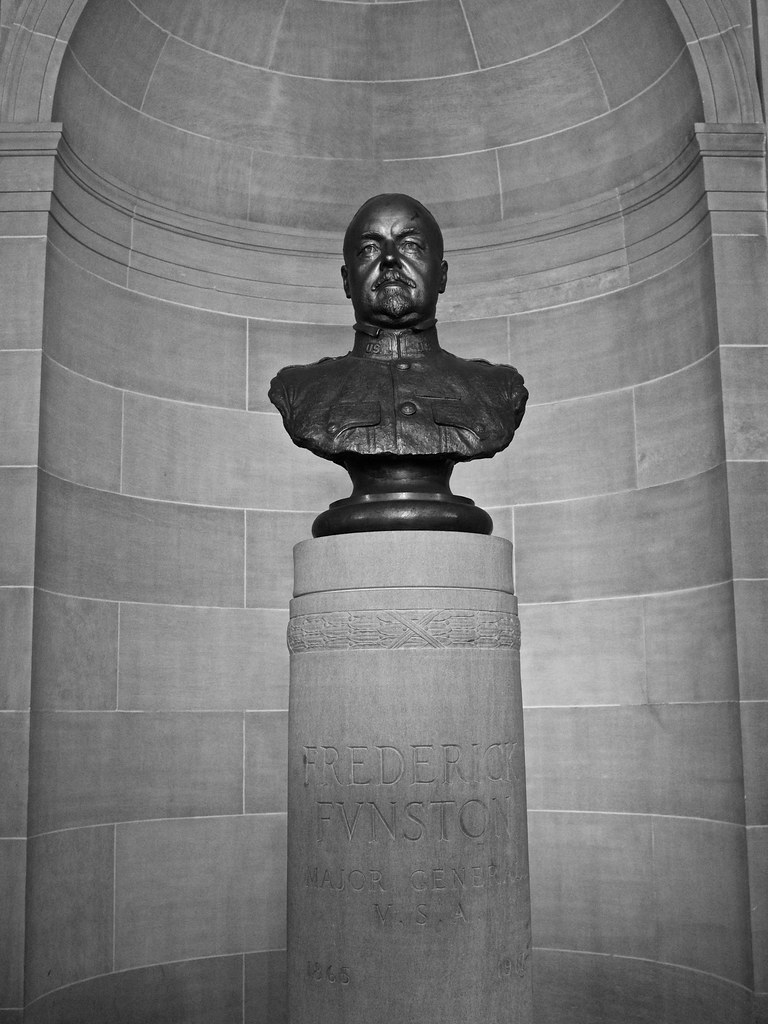